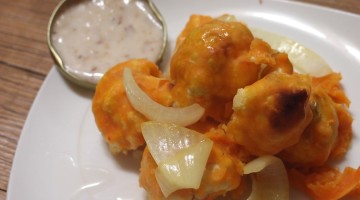 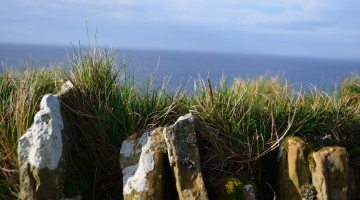 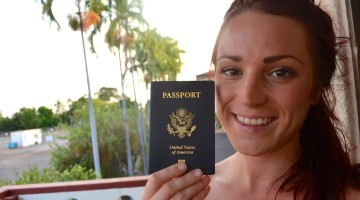 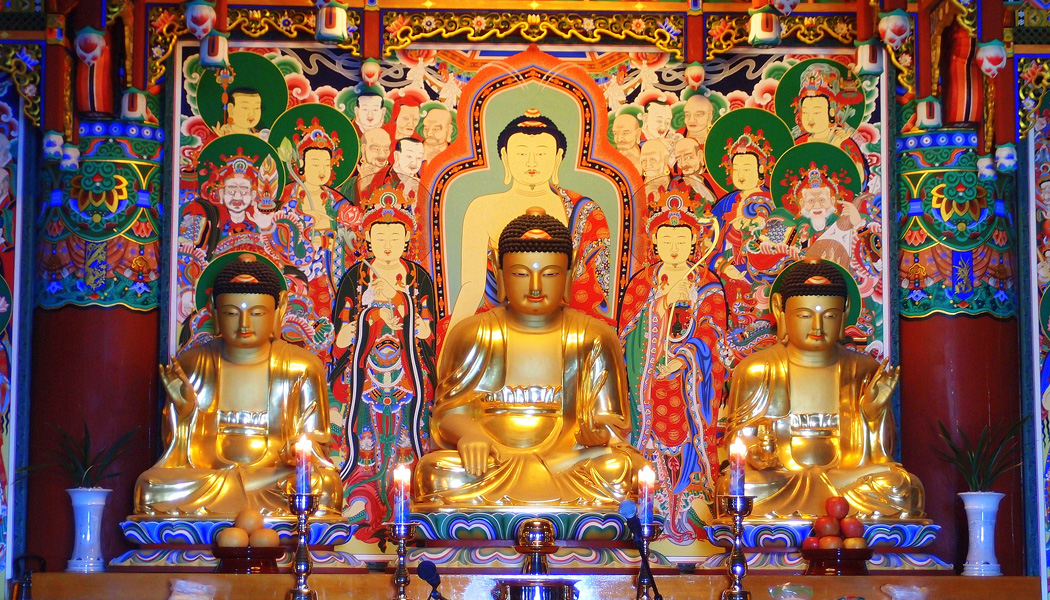 After being granted a short winter vacation, a co-worker and I decided to jet off to Busan for a long weekend to visit her friend and hit the town.  Busan is Korea’s second largest city, and we were both excited to leave our tiny island home and explore the metropolis for a few days.  Although the city is a bit uninspiring as far as architecture goes, it has loads to offer a traveler on a budget.  I took a small amount of cash with me, determined to not have to bust out the ATM card, and succeeded.  The most that I spent was on subway fare, as it is quite a spread out city with multiple “centers”.  All of the attractions that we went to were free, and I don’t feel like I missed out in any way by sticking to the budget.  The nightlife that I experienced was also fantastic, with many nice bars charging only $3 for a beer.  The KSU area was a great place to party and meet new people, specifically at the super-popular Eva’s Ticket and HQ.  On New Year’s Eve, I left my coat at Eva’s, and they kindly kept it for my friend to pick up a few days later.  Unfortunately, my heels didn’t survive the night, and I was left walking like a wounded duck until well-past sunrise on New Year’s Day.  Overall, I had an amazing time in Busan, and I recommend a visit if you ever get the chance.  If so, check out some of my favorite places from my trip.

Busan Museum of Art: We went for the “The Years of the Hour Blue” Jan Fabre Exhibit, featuring over 30 drawings and sculptures, all completed with blue Bic ink.  The Korean exhibits were also fantastic, and all was free.  If you enjoy art, it’s definitely a must see. 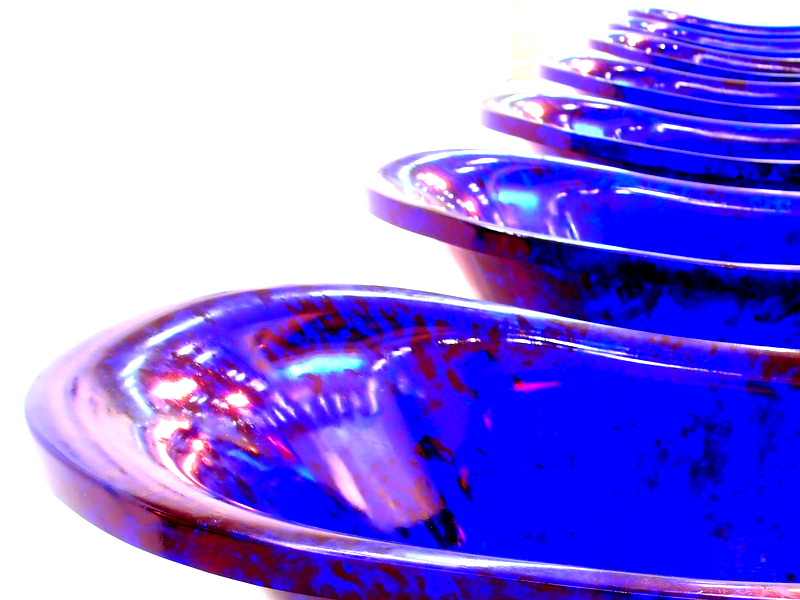 Shinsegae Shopping Center: Not for the faint of heart, this mall is registered as the largest shopping complex in the world.  It boasts 14 floors of various ways to spend your money, from clothing shops and restaurants to a spa and a driving range.  We were beyond desperate to hit the H&M- you wouldn’t believe how tricky it is to find pants that fit a Western body in our small Korean town. 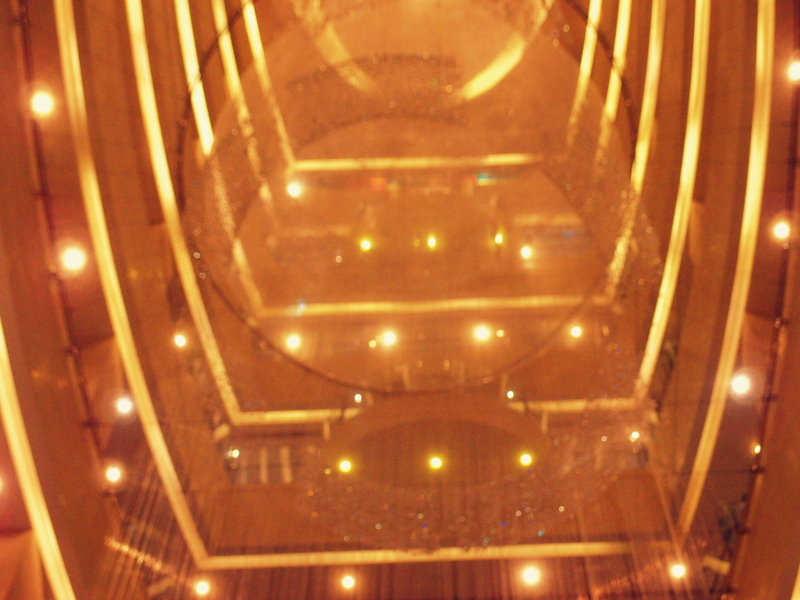 Haedong Yonggunsa Temple: This temple was built directly into the coastal cliffs and rocks-a rare find in Korea.  It was packed with tourists when we went, so maybe try to hit this place on a weekday. Catch the 181 bus from Haeundae Metro Station and get off when they announce the temple stop (about 30 minutes). Right outside the temple grounds, you can find a market filled with freshly made snacks, dried fruit, and souvenirs. 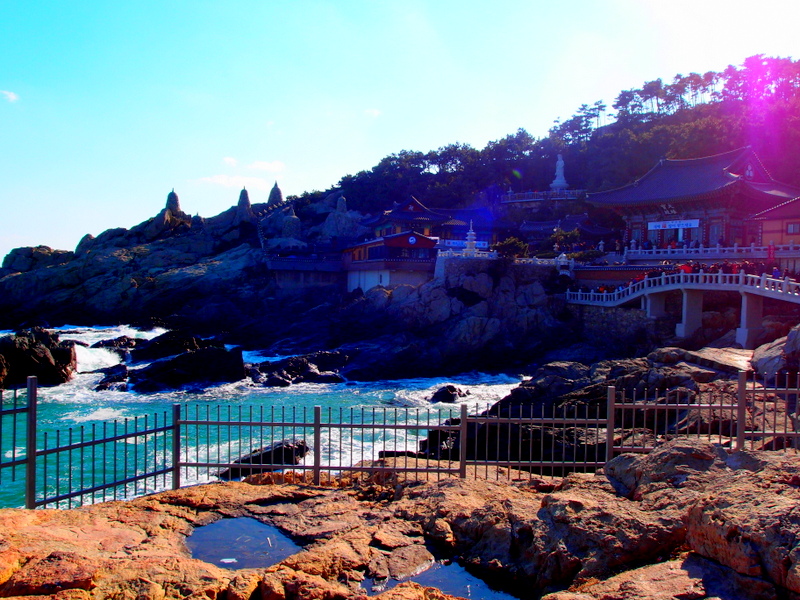 GoEun Museum of Photography: a small and secluded gallery that leaves you feeling like you’re getting a private viewing.  Only two other people came to the gallery in the 30 minutes that we were there.  When we visited, the gallery was hosting a Bernard Faucon Exhibit.  Again it was free, but I would have gladly paid for it. 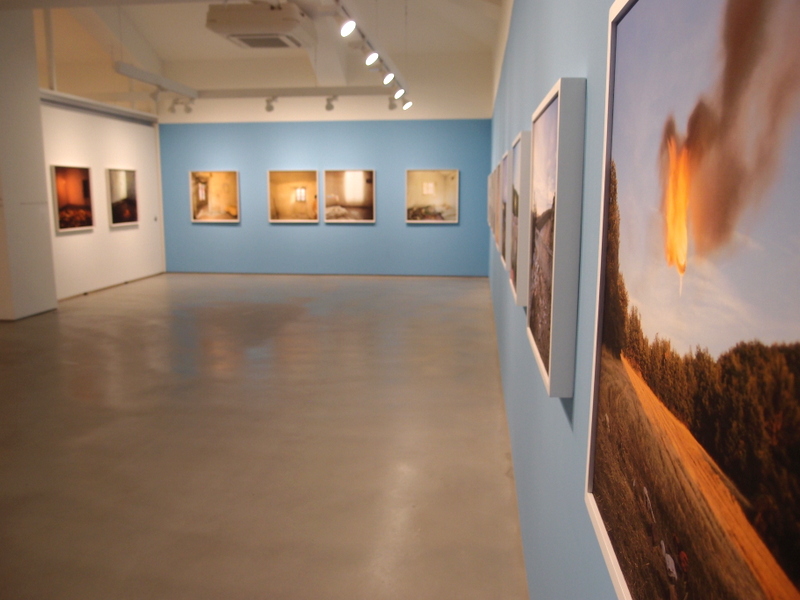 Haeundae Beach: Busan’s most famous beach may not be so great for swimming in December, but it was still nice to have a walk there.  I imagine it’s covered with thousands of oversized hats and umbrellas during the summer, just as it was packed with smartphones and tablets at sunrise on New Year’s Day. 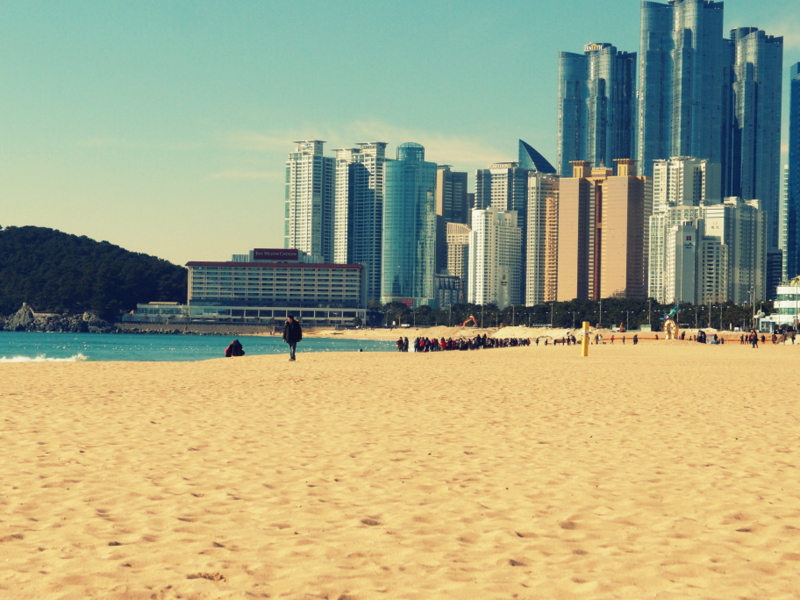 Fully Booked: an awesome cafe in the KSU area run by an expat who has made Busan his home.  It’s a quaint little 2 bedroom apartment turned cafe that serves draft beer, mulled wine, and non-alcoholic beverages while allowing you to catch up on English reading or play classic board games. 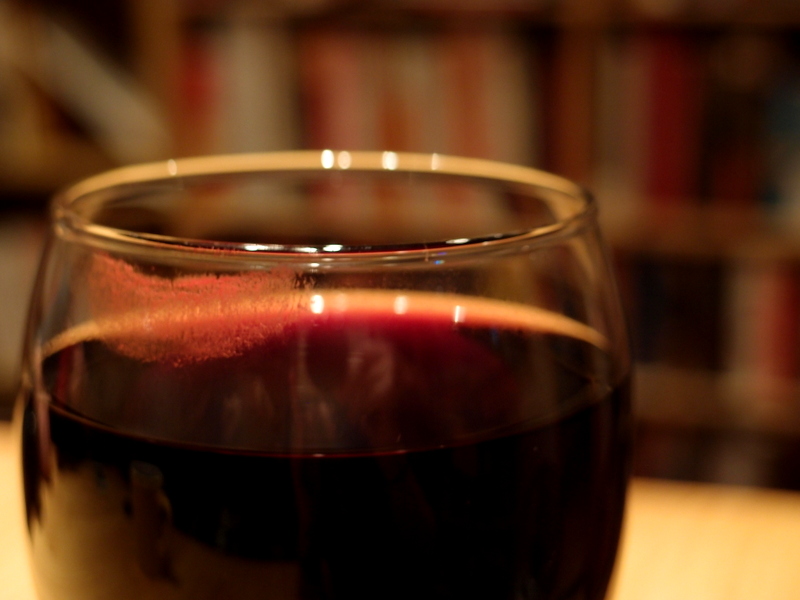 Gwangalli Beach: This beach is surely the place to be in warmer months.  You have fantastic views of the Gwangan Bridge, as well as being surrounded by awesome restaurants on the boardwalk.  We hit a Thursday Party (a chain in South Korea) for a drink and some Western bar food. 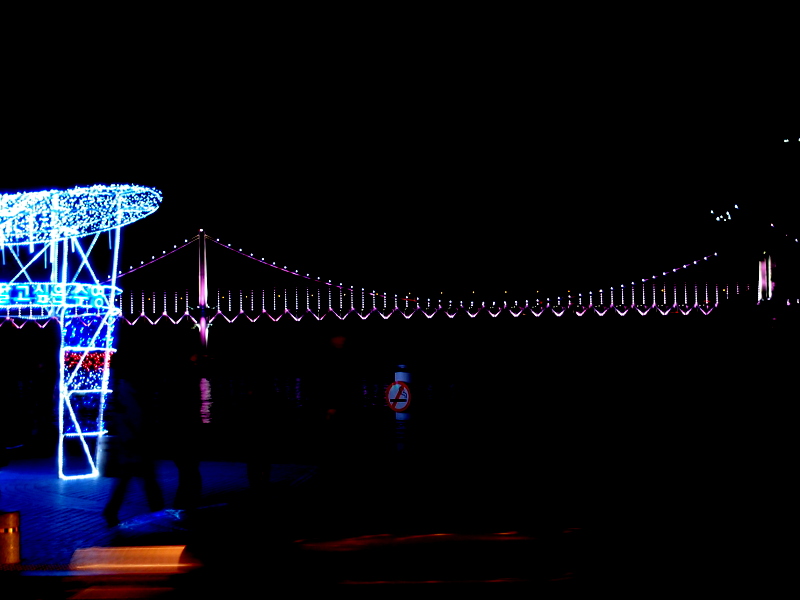 Nampo-dong Underground Market: to satisfy your shopping needs at an affordable price-I got 3 nice accessory scarves for $6.  The metro station is located inside the market, making it impossible to get lost.  There are also several other markets nearby, including Gwangbok Underground Shopping Center, Gwangbok Shopping and Fashion Street, and the Busan Tourist Shopping Center.

Bosu-dong Book Market: The name is misleading.  This “street” is more of a super-crammed ally filled with tens of thousands of books.  Although most works are in Korean, my friend found several steals on the various shelves.   It’s also fun just to have a look around. 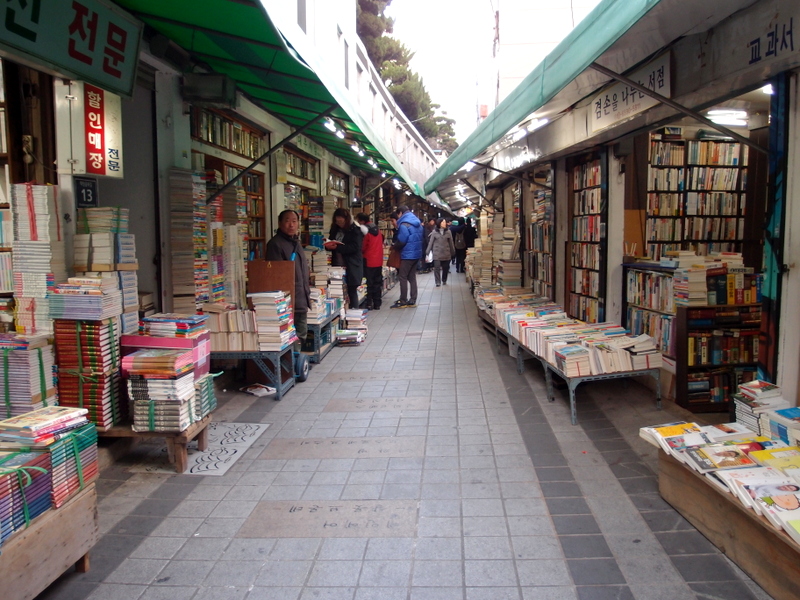 Changseondong Food Alley: Located in the Nampo-dong, Gwangbok-dong area, this tiny street is filled with make-shift cafe’s on the street and vendors with authentic Korean food.  It’s a bit challenging to find vegetarian options, as is the case with all of Korea, but definitely not impossible. 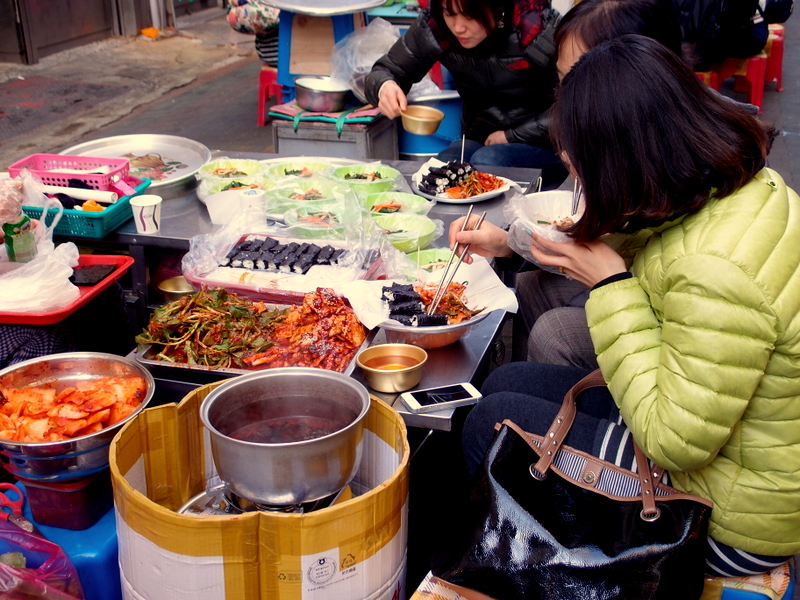 Make-shift cafe in the middle of the street

Beomeosa Temple: This was one of the most peaceful places I’ve been throughout my travels.  It’s a bit of a pain to ride the subway for an hour, but the crisp mountain air makes the journey well worth it.  Beomseomsa was much less crowded than Haedong Yonggunsa, and was surrounded by beautiful forest and nature.  You can take a bus or cab from the metro Line 1, or make the half hour hike up Geumjeongsan Mountain. 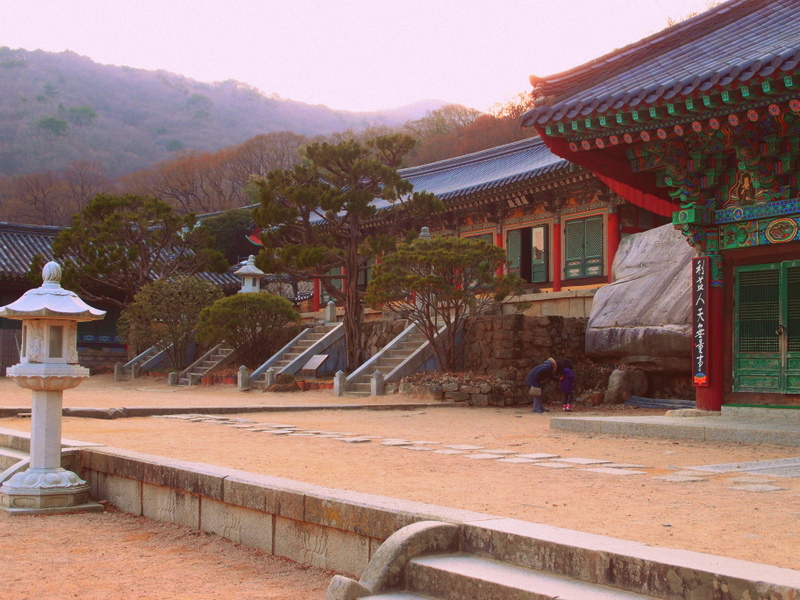 One of the main courtyards at Beomeosa Temple 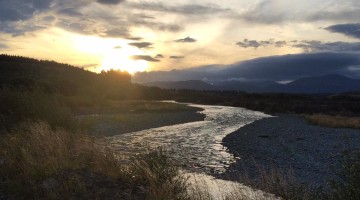